From the House of the Gods 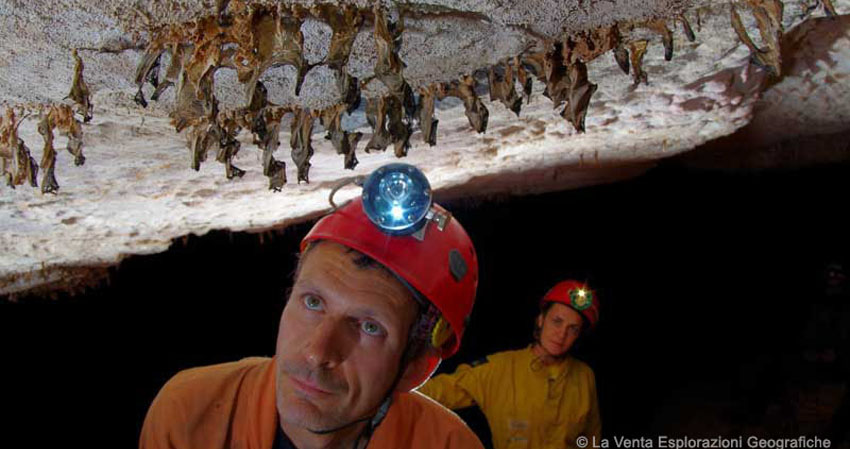 I am returning, airport Boa Vista, Brazil.
I left yesterday morning around 8 o'clock from the underground the base camp in the cave Imawarì Yèuta ("The House of the Gods" for pemones indios).
It was late. I did not hear the alarm clock because in the night, due to a strong external rain, the noise of the underground stream that runs near the camp has increased.
Or maybe I did not hear it because I did not want to leave the House of the Gods.
In less than half an hour I arrived at the surface, at base camp on the Auyan Tepui, where alongside the colorful tents Ferrino rests a strange creture, black, giant. What on the Tepui we call The Time Machine: the helicopter.
No time for a coffee, we must go down to catch the window of clear in the clouds that almost always cover this sector of the immense Auyan Tepui. Take off my caving suit, I put the stuff wet from overnight rain, greetings and kisses, a bit of emotion as always when we separate. And as always the struggle between the desire for a good shower and the desire to stay up here.
In the cave he has remained the group that is working with the laser scanner in the most significant areas: the Gallery of the Thousand Columns, the salon Paolino Cometti, the Sima de la Cascada. A slow work, monotonous, but extraordinarily needed in a place like this underground system.
Outside, a short distance from the external Base Camp, was descent yesterday a new fracture (grieta) and found a cave with water running, but not the large gallery and the great river that is certain, are down there somewhere. After all Himawari is already more than 22 km, and was not surveied nor fully explored…
The group that I leave is happy, though not everything went smoothly: costs greater than expected, the radio bridge that does not come to cover this area, many annoying illnesses, especially dysentery and things like that. It is not the water in the base camp, but something caught in the village of Kanarakuni few days ago. Antibiotics have not been helpful and were hit especially Carla, Daniela and Captain Cesco Sauro, today called Revenant.
The first ignition attempt fails. If the starter does not work in my house you can push, or go to a near mechanic. But here? On the top of a tepui? From this area on foot or with the ropes is impossible to go down, we should wait another helicopter, who knows from where and who knows when...
Then the noise of the air turbine tears the thin air of the mountain, the wind caused by the blades lashes the impenetrable forests of Bonetia while the fellows who remains holds the tents. Their faces looking at us flows from down, more and more distant. We enter into the clouds.
Twenty minutes flying and we go down of 2,000 meters to Kavak, indigenous village and small resort managed by the community of Kamarata. First shower after an indefinite number of days, almost the ecstasy. Clothes hanging in the sun for a few minutes, quick meal and then a Cessna that in two hours runs almost 500 km leading me to Santa Elena de Uairén, on the border with Brazil, from which I leaved time ago. Posada Apoipò, first night on a regular bed after nearly a month: I desired it really, but unbelievably I sleep badly… and still I think of what we are doing.
After the challenging explorations on the Sarisariñama, the second part of this mission La Venta/Theraphosa is dedicating to the House of the Gods with scientific activities such as laser detection, the microbiological sampling and more. Will end on next 22 or 23, then the most of the group (fifteen people) will be back in Italy, a lucky few will continue to south for the upcoming expedition in Patagonia, while the Venezuelan friends will stay at home, to fight daily against a social situation and an inflation that is destroying one of the most beautiful and richest country in the world. May the force be with you, hermanos.
This morning I crossed the border with Brazil coming here to Boa Vista airport, where I'm waiting for the flight to Manaus. Today I will sleep in the capital of Amazonas state, overlooking the Rio Negro, and tomorrow I have a flight to Lisbon via Belem. Finally in Italy on Sunday, having left on Thursday. Four long days to return and many, many more to remember.
Tullio