The expedition Tepui 2016 is over, but the dream continues 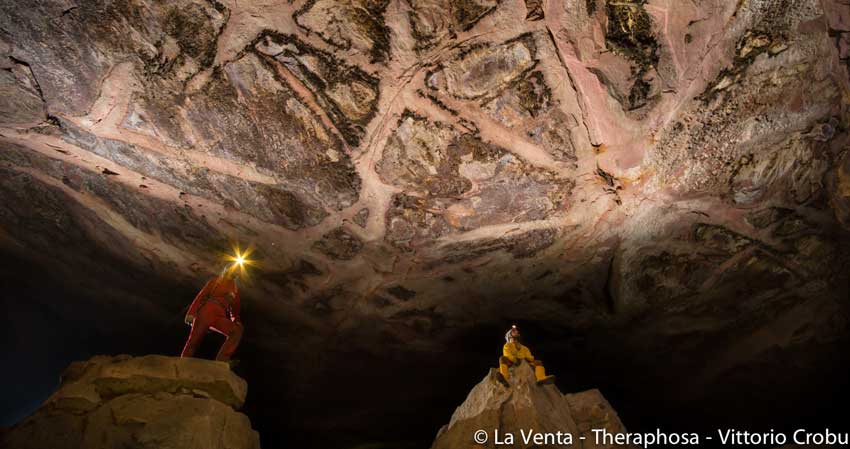 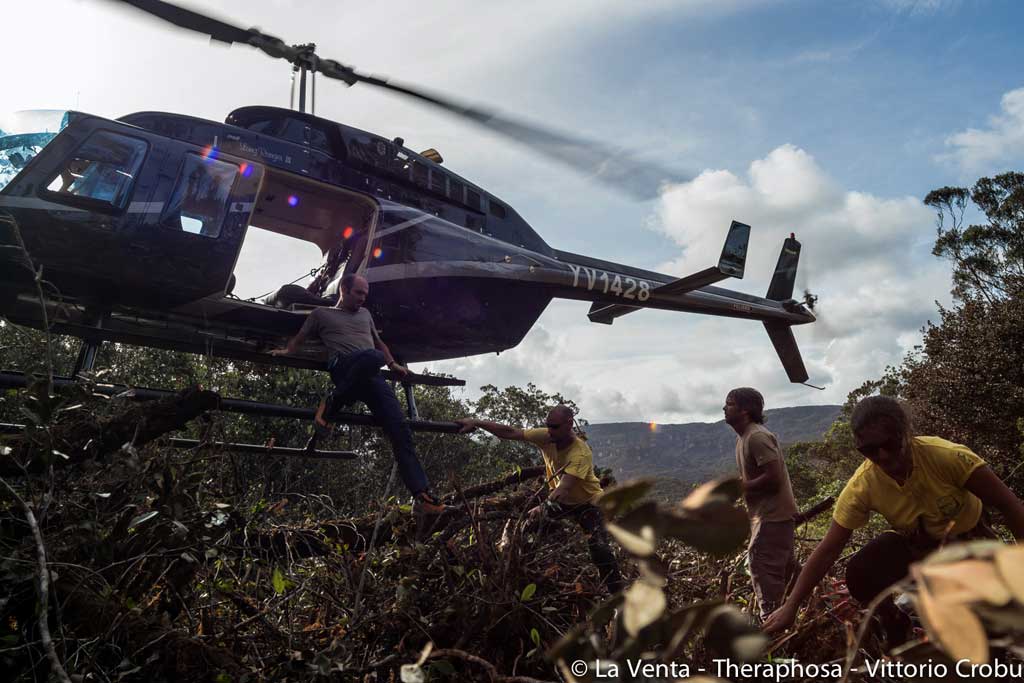 Sarisariñama
It was an expedition very challenging and complex, due to the environmental conditions of this tepui, almost completely covered by the forest. The base camp was set up in the village of Kanaracuni, an indigenous community of Ye'kuanas ethnicity, mythical place, theater of the epic explorations of the Italian geologist Alfonso Vinci in the 50's. As always in our philosophy, we felt it essential to involve immediately the natives, with Captain Romulo and other community members who were directly involved with us in the search of the entrances on the plateau. We then had the good fortune to share with them many pleasant moments which led to a great friendship between La Venta, Theraphosa and the community.
The research activities have focused on three fronts: exploration of a number of new simas identified in the satellite imagery in the southeastern sector of the massif, documentation and sampling in the most important caves explored by the Venezuelan-Polish expedition of 1976 (Sima Menor and Sima della Lluvia), and documentation for GEO with the photographer Robbie Shone and the journalist Lars Abromeit. Two main camps have been set up, one in the north area where are the known simas and one in the south with more unknown factors. During the 12 days on the mountain we were able to explore 4 new simas, two of them close almost immediately with collapse, while two more gave significant results with the Sima del Pajaro del Diablo (in indigenous language Yadanaima Ewutu) that goes down to -240, almost one km long, with a huge chamber up to an area where the ground water go up for several meters, and the Sima Profunda (in indigenous language Tuna Enitojudu which means "where went the water of heaven") that was descented to about -200 with large pits and chambers and where the exploration was terminated for lack of ropes. But not only explorations, were also made interesting mineralogical observations and numerous water analysis, providing many new suggestions to be developed on the genesis of these gigantic collapses. We also made the first serious documentation of of the Menor Sima galleries and reviewed from the scientific and photographic point of view the 1.5 km of the Sima de la Lluvia galleries. Our only regret was not being able to find access to the large underground river that disappears, swallowed up in the southern area. The simas aligned along the direction between the sinkhole and the resurgence have proved to be in general very obstructed by collapses and the river level is at great depths, probably beyond the -250 meters from the surface. The discoveries have however been notable and with a single expedition we doubled the knowledge about the caves of this mountain of the previous forty years.
To reach these results we have faced many logistical and coordination difficulties with extreme maneuvers for the helicopter that has always worked in overing and without doors to move people and materials. Complex operations with side descents, handled very well by the pilot José Galindes, by our Freddy Vergara and by José Garcia (responsible for the of civil protection of the Bolivar state), and with barycentric of over 60 meters to carry the material. Equally, the difficulty of the crossing of the forest to reach the entrances, has been remarkable, with bridges suspended on trunks, thick forest, lack of water and very high temperatures.
At the end of the expedition have been also collected testimonies and legends from an elderly Ye'kuanas which provided a clear view of the geography of the tepui, providing also names to the unexplored simas, as if the natives knew them by ancient times. Even the memory of Alfonso Vinci is still present, half a century after his first arrival in the area.
It was hard to leave this place so magical and still full of mysteries, with the certainty that the explored caves are just a small piece of what could enclose this mythical mountain. 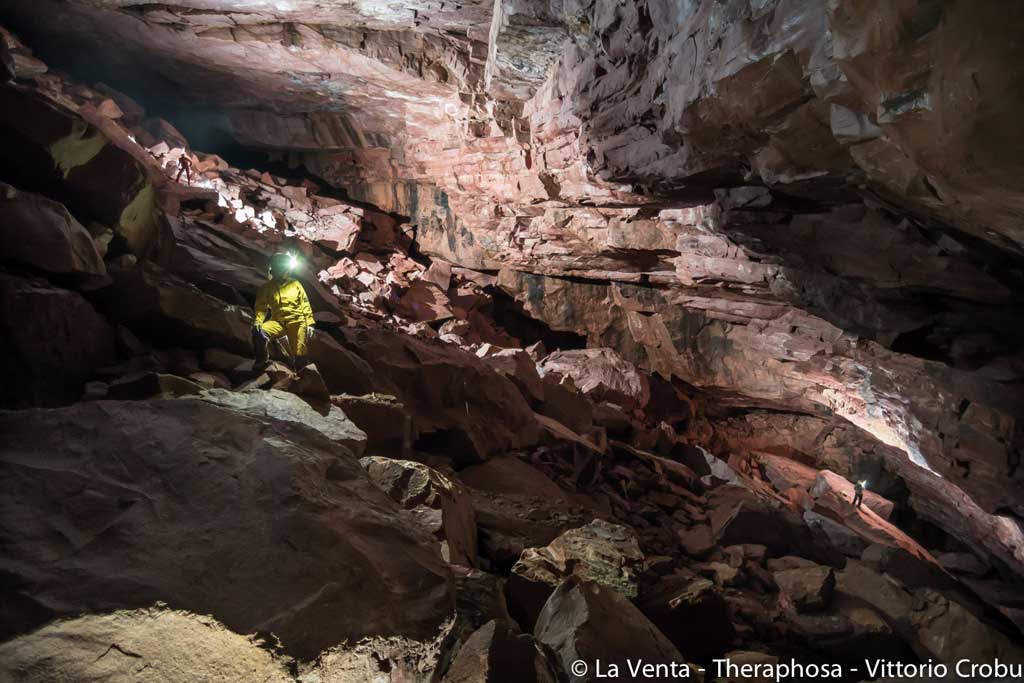 Auyan
Ended on Sarisariñama, march 9th some of us came to Santa Helena to return to Italy or rearranging the logistics while others are flown directly to Kavak village to return on the Auyan Tepui.
We returned to Imawarì Yeuta not only because there is still much to discover in this area of the massif, but above all to continue the work of documentation and study of one of the most beautiful caves in the world. We had been last year in June for the realization of the BBC documentary that went on air just during the latter days of expedition and that can see in streaming here, in episode 2: http://www.bbc.co.uk/programmes/b074c5jk (using a VPN from outside UK).
The objectives of this new expedition on the Auyan were the following: documentation of the most important areas of Imawarì Yeuta cave with laser scanner, research activities (even with another Rolex award, Hosam Zowawi), the completion of the photographic documentation, and search for new caves in the southern area of the Grand Derrumbe.
From here the cherry on the cake came; in the last two days we have also discovered a new cave, surveied for a kilometer to the southeast limit of this enormous sima. Another nice piece of the system, unfortunately explored only briefly and with remarkable environments and speleothems.
This discovery confirmed that Auyan still lurks many secrets, alien worlds, each one having its own characteristics that never cease to amaze us. The emotion of looking out on a new unexplored abyss, to feel the wind that moves the palm trees in front of an huge portal. And then the desire to observe, study, understand. But that's not all. I believe that these two expeditions have taught us much about how to go further. The Sarisariñama was the first step in addressing the complex logistics of the Amazonian tepui, to understand the geological and environmental characteristics. Now we are at home, but remembering the experience we are already dreaming about the future. And the tepui remain islands of time, fragments of lost paradise on Earth that attract us with their siren song. As far we will resist? These expeditions would not have been possible without the support of our companions of adventure of Theraphosa and in particular of Freddy Vergara. We are all safe thanks to the security and professionalism of the legendary Raul Arias, of its pilots, of Karina Ratzevicius and the helicopter captain José Galindes who has been with us for over a month over the threshold of time.
The project is backed by the Bolivar State Gobernación, a special thanks to Dr. José Garcia, who has given us a valuable medical and technical support for both expeditions.
A huge thank you goes to the indigenous community of Kanaracuni and Kavak, because what we shared remains rooted in your land, forest, water, rock, and will survive to ourselves.
All this would not have been possible without the financial support, but above all human, of the Rolex Award and his wonderful team.
A special thanks also goes to Tiziano Conte, who has always supported us and with whom we shared this adventure.
And also thanks to Marco Camorani of Gruppo Servizi Topografici for the help in the laser scanning. 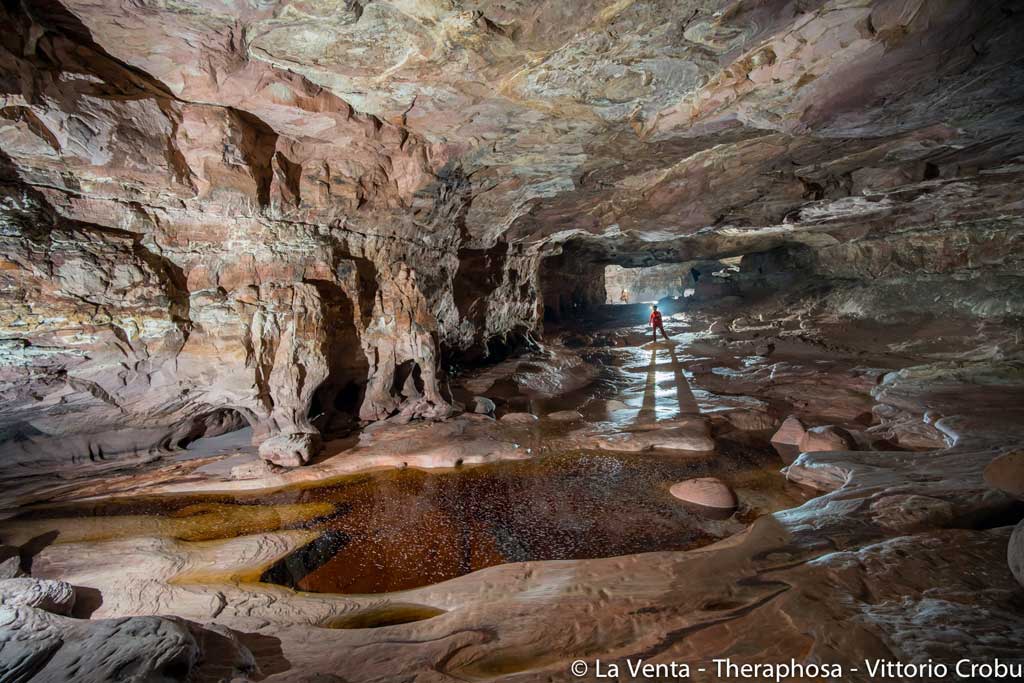