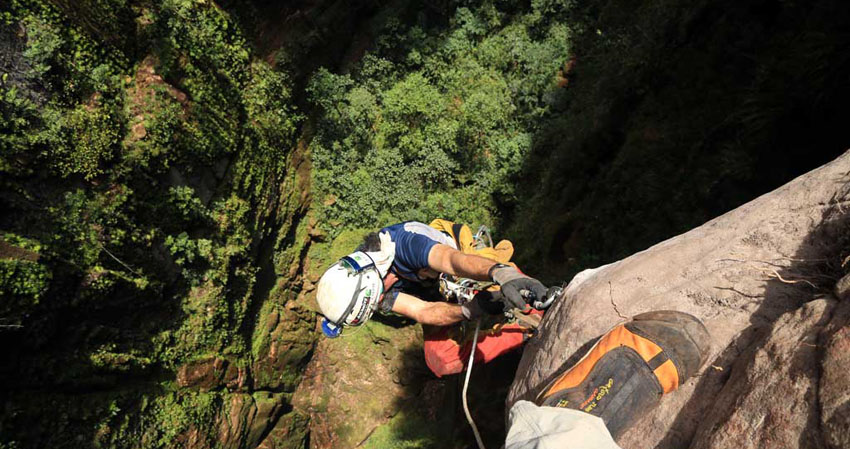 It has been a few days but very intense and full of activities. All the work has been concentrated in about ten days because of long trips as the area it is not served by roads and we had to make extensive use of small planes that could land on the short track of Kanadakuni, the Ye'kuana village at the base of the massif.
There, we were greeted in a very welcoming way from the village which has provided us with the Churuata (shared cabin) as well as supplies of water and fresh food. And it is thanks to them that we managed to get to some of the goals of the expedition. Their help in opening traces of trails in the forest was essential. In particular that of the head of the village Romulo Rodriguez.
Moreover an elder of the "near" village (two days' journey) of Fiyawaña, the wise man Lorenzo Garcia, told us about the legends of this mountain. A wonderful story that has its roots in myth and forest. As soon as possible we transcribe and publish it because is really addictive and because it demonstrates a knowledge of the mountain and its most hidden parts (the simas exactly) unbelievable.
The team soon divided into two groups.
The first group, after mounting the radio bridge essential for communications, was literally downloaded from the helicopter in the north area of the tepui at the Sima Menor (Mütakiñu wejakajudu which means from where rose the diseases in the world). Equipped the wall of 140 meters have been revisited the Cueva de la Cascada and the Cueva de los Guácharos to carry out the documentation and take scientific samples. Soon after they were moved to the Sima Profunda (Tuna enitojudu where it went the water of the sky), a great unexplored shaft of 150 meters at the base of which a new cave was explored (at the moment called Salon 174) that reaches the depth of 200 meters, where were made documentation and scientific researchs. This camp was characterized by the complete lack of water on the surface and therefore from having to supply down in the cave, with the effort to bring out tens of liters of water in heavy bags. Moreover, the very inhospitable environment of the forest, has caused it to be handled as a real advanced camp with the use of only freeze-dried foods.
The second group has operated in the area south of the Massif. The first exploration was immediately fruitful. The discoveringo of the Sima del Pajaro del Diablo (Yadanaima ewutu the devil's parrot) has led to the exploration of a new cave 240 meters deep with environments remarkable in size and very interesting from the scientific point of view because it develops at the contact between the inclined wall and the accumulation of collapse blocks. The camp was then moved at Sima Redonda (Kurata yejakajudu where they built the blowgun to kill Dimoshi, the eagle that ate the natives). A camp almost suspended on the trunks at the top of the walls of the sima where to move it was impossible. The Sima descent has not led to the discovery of any cave at the base. We moved so in a more comfortable field on the bank of a river. But the convenience of the camp and finally the presence of surface water has been paid in terms of the amount of hours of movement in forest to reach the two additional objectives. The first, a resurgence (Kudata emajojudu where they hid the blowpipe) in altitude It gave the hope to get into the freatic level. Unfortunately, also here we have not succeeded in. While the second objective, the Sima de la Lluvia (Tudene wowiinakajudu where he hid Tudene, the eagle killing) and the underlying Cueva de los Cristales have allowed to carry out the sampling operations and the documentation.
On the last evening, returned to the village of Kanadakuni, has seen us protagonists of a sumptuous dinner offered to us by the natives made from venison and yarake (fermented yucca liquor). And perhaps because of this, while someone more sober was illustrating our experiences in the forest and in caves on the mountain to the community, others have "performed" in a volleyball game in which local girls have done a great figure!
The whole expedition was followed by a journalist (Lars Abromeit) and by a photographer (Robbie Shone), themselves excellent cavers, for the magazine GEO Germany.
A special thanks goes to the helicopter pilot (Captain José Galindes) given that we have always had to operate in hovering without to land because of the vegetation. And of course to Raul Arias (our member and especially friend for many years, owner of the company who supplied it).
Now the group split. One part, now in Santa Elena on the border with Brazil, returns to Italy, while others are moving towards Auyan Tepui and the Cave of Imawari Yeuta where they will conduct further scientific analysis campaigns (geological but especially microbiological) and the completion of the video and picture documentation.
Just arrived back in Italy will show a few more pictures and some movie segment to share these beautiful and wild places.
Leo Colavita