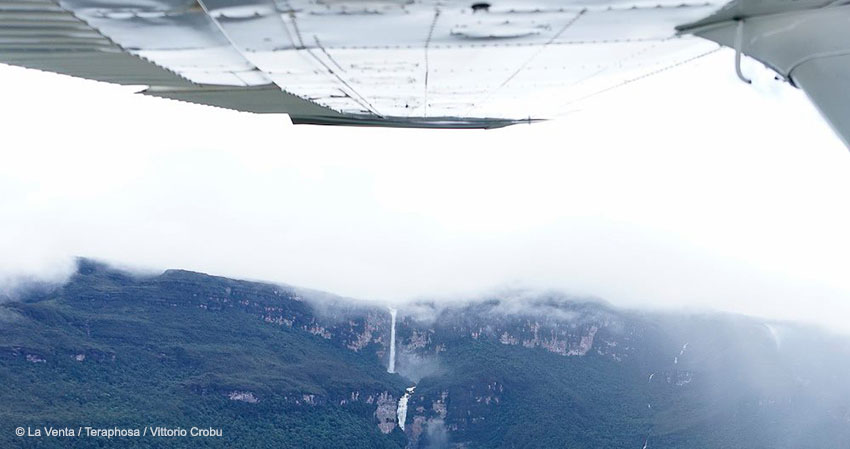 The small hotel where we are staying is called Apoipo, which in the local language is a form of greeting well-wishing. Which it bodes well for a group that is planning to go to do things a little complex in a place far away from everything.

From here the few passing tourists head to the famous Roraima, the tepui most frequented, located a hundred kilometers NE. We instead tomorrow will go the other way, to the west for about 500 km. Early in the morning from the small airport will depart a strange and assorted air squadron: a Long Ranger helicopter, an old Antonov cargo plane with the usual abundant ton of material that follows us faithfully, two small Cessna. In total 12 people, 8 Italian and 4 Venezuelans. The well-established "Gang of Tepui", led by the pirate Cesco Sauro, without kerchief but with on the wrist its famous clock, spoils of a victory that allows us these non just economic expeditions. But dollars would not be enough if here there was not our member Freddy with the other guys of the venezuelan cave group Theraphosa.

What are the Tepui? Is since 25 years that we come here, everyone should know... are huge and ancient towers that rise from the plain called Gran Sabana, consisting of very hard quartzite. Mountains posed definitely on the border between reality and fantasy, but more pendants by the latter side... There are about seventy, scattered over a vast territory, almost all inaccessible except by air assets. I will say more: many have never been reached.

And there are caves on Tepui? Ah, but then we have to explain it all... in theory there should not be, because the quartzite is infinitely less soluble of our beloved limestone, but in practice there are. The extraordinary age of these mountains, over a billion years, has allowed that could happen everything to them: very deep fractures, very large horizontal systems, new minerals, new concretions, new forms of life... in short, an alien world that can give a lot to the scientific research.

So it is now time for a tepui much more remote, the Sarisariñama. A nice name.

We go to explore it, but we're not the first.

The track where we land tomorrow with our colorful flotilla, at the indigenous village of Kanarakuni, was opened half a century ago by a great Italian explorer, Alfonso Vinci. If you have not read "Live as if you were eternal" do it, it's worth it.

The Sarisariñama, which dominates the area, was joined for the first time by Charles Brewer Carias in 1974 and then exactly 40 years ago, in 1976, by Polish and Venezuelans cavers, always with the support of an helicopter.They explored three caves: the Sima Mayor, the Sima Menor and the Sima de la Lluvia (abyss of rain). The latter, 1 km and a half long, became the greater cave of the world in quarzite rocks. Himawari is now 15 times that long, but we are not talking to compete over who located the longest cave.

It is going into the tepui, exploring one at a time, in a systematic way, and look at them with new eyes. To get lost in their three-dimensional heart and gradually discover all of the stranger things they have to tell us. Will not fail to let you see.