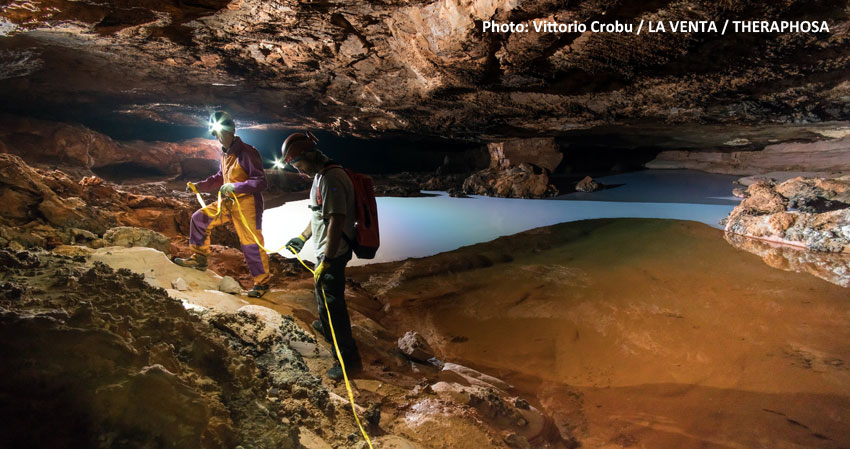 I began to do caving because of the curiosity to look beyond the darkness, the thrill of exploring new lands and the inebriating feeling of being amazed by what Nature still hides from our eyes. At the beginning it was a personal research, it was the desire to understand the dark world beneath our feet: I devoured books and stories, I tried to capture everything I could learn from great masters like Giovanni Badino, Giancarlo Pasini, Norbert Casteret and many others. I always felt that this desire to discover was not an exclusive feeling of speleologists but that it was something rooted in the DNA of all men. However, when I tried to tell the adventures lived in the meanders of the Spluga della Preta and in the endless galleries of the Eternal Plans, I clashed with the difficulty of making people unfamiliar with this activity the universal motivation that leads us to face so many hardships and hardships.
After almost twenty years from those first personal explorations, I never thought that one day the exploratory and research speleology would reach such a vast audience as it is happening in these years. Once I heard many people say "I would never go to the cave, but what are you so interesting about?". But now the phrase has changed in a sense of positivity and subtle envy, they recognize us as privileged: "I would not make it, but looking at those images I understand the charm of what you do".
All this is the result of a communication process facilitated also by the advent of digital photography. The technology has allowed us to bring to a far wider audience spectacular images of those hidden worlds, so that today everyone can put themselves in the role of speleologists, the last explorers of the earth. La Venta has undoubtedly played an important role in this process. The association has always been dynamic and open to large-scale projects, and thanks to the multidisciplinary approach it is able to show not only the beauty but also the scientific importance of speleology. 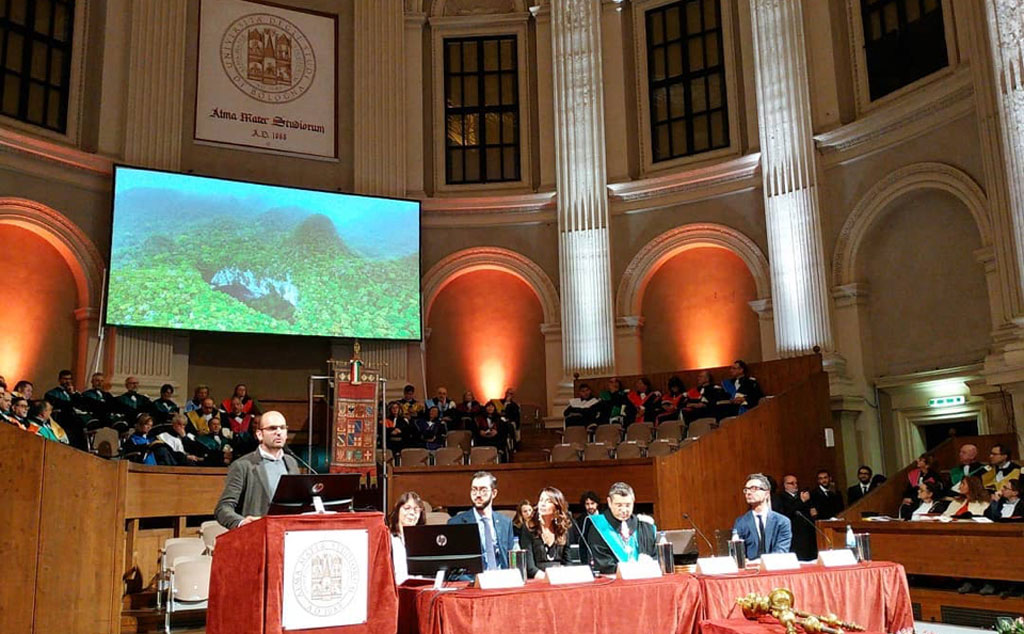 Following the discoveries and acknowledgments received for the Tepui Project, the University of Bologna, thanks to the sensitivity of the Rector Magnifico Prof. Francesco Ubertini, has realized that within its walls a fascinating discipline with enormous potential. Besides having financially supported research on the caves of the tepui, he wanted to give prestige to the whole scientific community.
When I was asked to hold the lectio magistralis at the inauguration of the Academic Year 2018-2019, I felt a bit 'in difficulty for such a great responsibility. We speleologists often do amazing explorations at home, but away from the spotlight. We tend to communicate our works exclusively within the speleological community, which is a real tribe. This makes us invisible to the eyes of the world, accustomed to the sparkling spectacle of everything. This has protected us from self-esteem that instead afflicts those who practice other activities that now have little to do with geographic exploration.
But we can not hide anymore. In recent years the caves, the Dark Continent, are in the limelight of the knowledge of our planet. We speleologists have the responsibility to communicate what we do, and to do it in the right way, because it is a good that we should be the first guardians, to protect it and deliver it to future generations.
Faced with the Rector's request, I then realized that I could not draw back: I had to show speleology for what it is, an infinite library of possibilities and knowledge, as Giovanni Badino described it in his moral testament.
Telling the speleology in front of an audience of over 1500 people, academics, students, citizens, was an exciting moment for me. While I was talking, I warned the audience about the same wonder I felt in front of the crystals of Naica, flying over the tepui, looking out for the first time in the cave Imawarí Yeuta, the House of the Gods. But the emotion continued even louder shortly thereafter, when Marica Branchesi, astrophysics of the University of L'Aquila, took the floor. From the unexplored worlds beneath the surface of the Earth has led us to look towards the universe, in gravitational waves and black holes, until the formation of the same elements, observed by telescopes in a point of light of iridescent color following the fusion of two neutrino stars. While he was telling us all this, it was evident that geographic exploration is a universal concept, which starts from our Earth, from the small but immense world of caves, travels to the farthest galaxies and goes so far as to who knows what borders. I had the feeling that speleology, brought to the same intellectual level of astrophysics, has finally been recognized as a discipline that expands the knowledge of the reality in which we live and opens up glimmers of light on the great questions of science.
The Heart of the Earth was the cradle of humanity, the dark temple where the representative art was born, the place of mystery where the soul of the past and of the future takes refuge. In the caves we find the testimony of all this history crystallized and we can follow the evolution of man as that of life itself on our planet.

A few days after the inauguration of the academic year was published in the journal Scientific Reports the result of two years' work of analysis and research on opal silica stromatolites of Venezuelan tepui. These are mineral formations deposited in the darkness of the cave over millions of years thanks to the activity of unknown bacteria. We have focused our attention on these strange rocks because in 2008 the NASA Spirit rover encountered silica deposits with similar characteristics in its path on the surface of Mars, which some scientists consider as a possible evidence of the presence of microbiological life on the red planet.
Among caves, black holes and Martian rocks, caving is opening a new road that teaches us to look beyond the surface of things, inject us that desire to see beyond the horizon, to turn the corner to illuminate the darkness more thick. We can not stop. Where this path will lead us it is hard to say, but finally the caves and caving begin to be recognized as an important part of the human adventure.