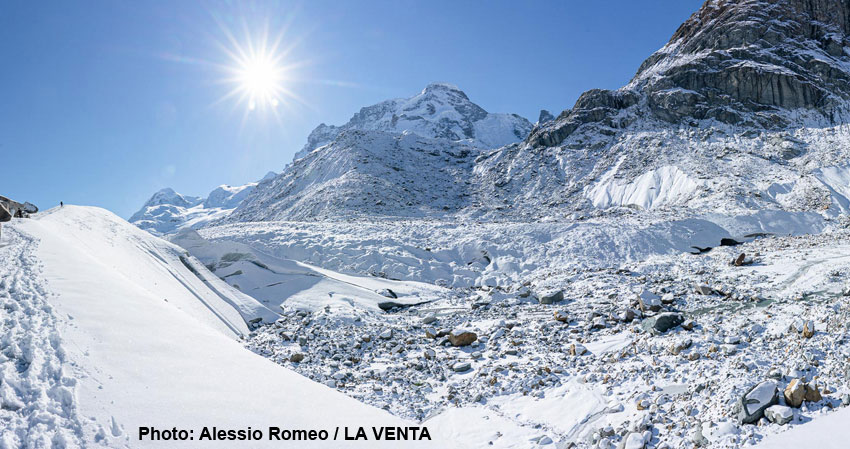 In this 2020 marked by the rampant Covid-19 pandemic, the activities of La Venta have also suffered a drastic slowdown, all non-European projects are obviously blocked waiting for a return to normal. It is in this context of global uncertainty that Alessio's e-mail, in which he proposed a 4/5 days on the Swiss glaciers, was a bolt from the blue!

From 16 to 20 October it was possible to set up a 2-day camp on the Gorner glacier and a daily outing on the Aletsch glacier. Among the seven participants, downsized compared to the initial 11 due to the Swiss restrictions on Covid-19, 3 La Venta members and 4 other speleologists including members of the “Glacial Speleology Project”. 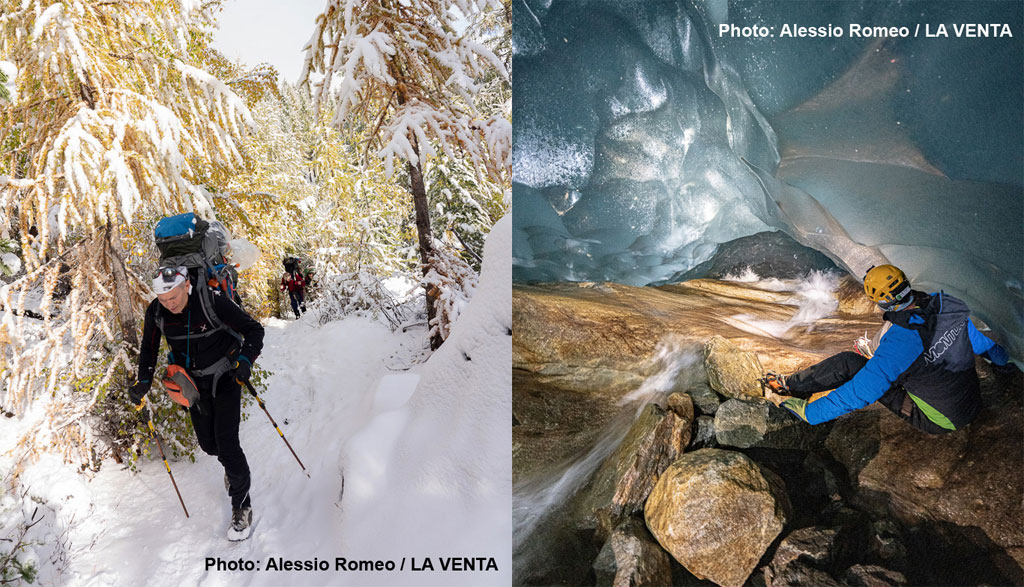 The main objectives of the field on the Gorner were two mills called G6 and G7 located at about 2450m of altitude next to the central moraine more or less in the middle of the flat area of ??the glacier. These two glacial cavities had already been explored in the late 90s and in the following years and despite the recent increasingly accelerated changes in the glacier, they continue to reform. Also in 2020 many of the mills that we call historical have reformed and among these also the G6 and G7 identified and positioned during a reconnaissance by Alessio in the month of August.
The bad weather initially expected for the weekend came earlier than expected, so on Friday 16 the weather situation was stable and allowed us to reach the glacier on foot from Zermatt in a whitewashed landscape of 15/20 cm of fresh snow. 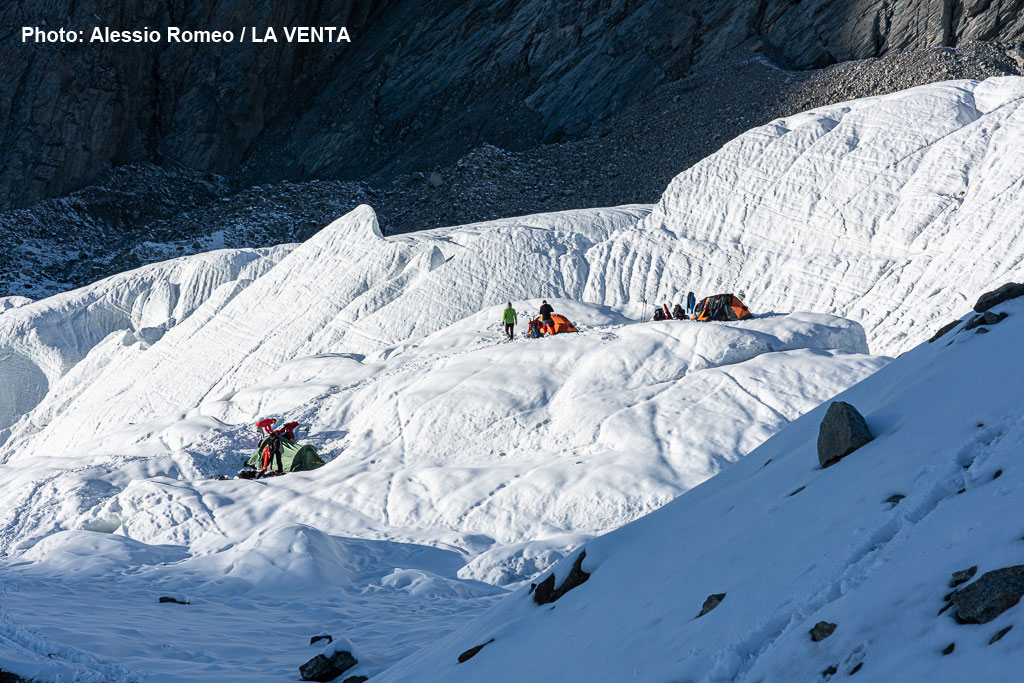 No matter how beautiful the snow is, however, you have to take into account the added difficulty when you have to face, with backpacks weighing almost 30 kg, the climb to the front of the Gorner, with passages in the middle of stony ground and boulders and snow-covered ice plates. The expected progression times to reach the mill area almost doubled and after 6 hours of walking it was decided to place the field a little further downstream. Fixed the tents in the ice with some cords using the "abalakov" anchors (the only solution on ice without using screws) we enjoyed the sunset on M. Rosa and Liskam and a quick dinner and then took refuge in the sleeping bag around 20.30, when by now we had reached a temperature of -5 ° C! 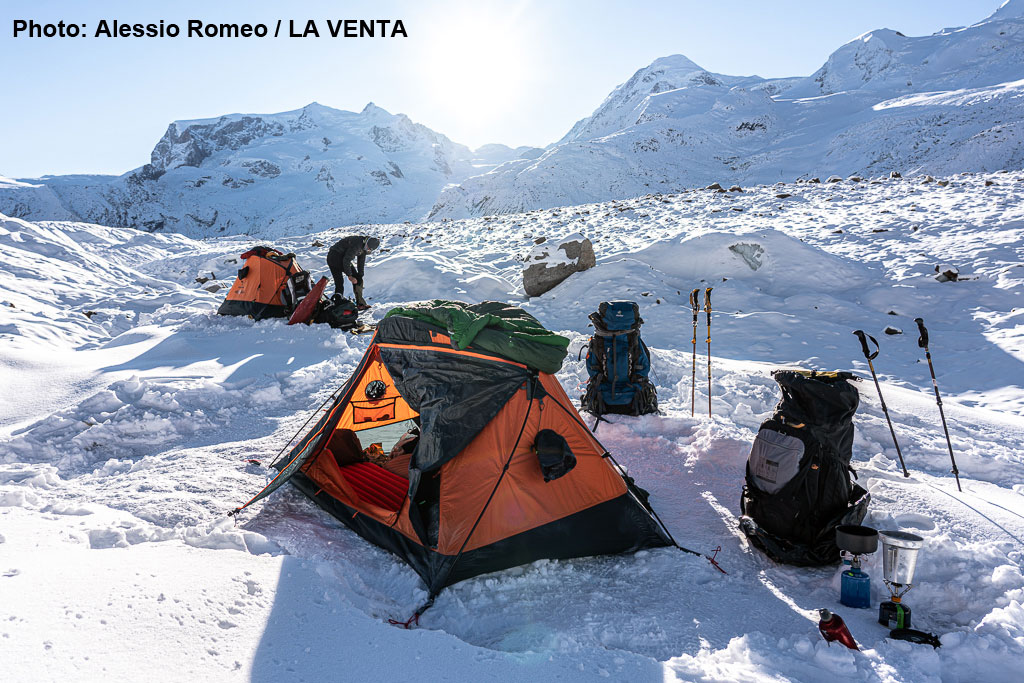 The cold night temperatures foreshadowed a clear change in the weather towards good weather and in fact when we woke up the sky was clear of clouds, we will discover that it would remain like that until the end of our tour! We reach the mills in an hour's walk and split into two teams: one for the G6 and the other for the G7. The G7 looks like a great depression, where the entrance to the mill is located inside. The bèdière is inactive and therefore we enter quietly. The well is a bit articulated and with a lot of snow inside and on the walls. It turns out to be a 40m deep well from whose base a rather large meander starts. The floor of the meander is strewn with tubs and pools full of water camouflaged by a thin layer of ice that should not be walked on. For this reason, we go higher, losing a lot of time for rigging. After a few tens of meters the meander becomes a tunnel, very white and "concreted". The exploration will end in front of a small leap, both due to the lack of armament material and because of the scarce material and because the flow of water (reactivated by solar radiation) makes it difficult to progress in narrower environments. We document with photos and then we go out. 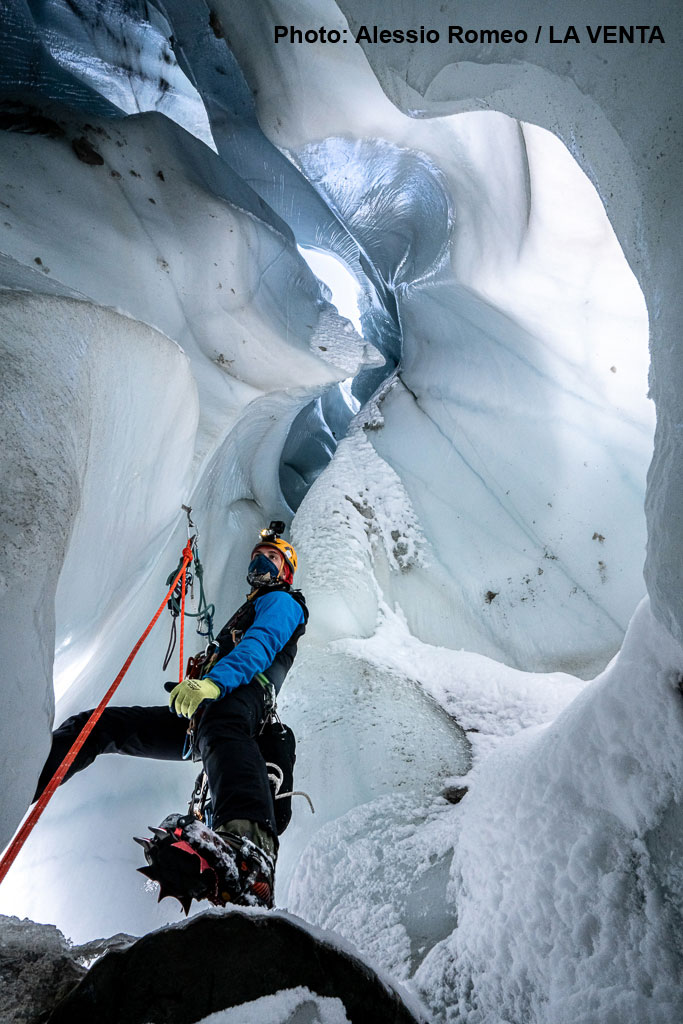 In the G6 the situation is similar, it is a gorge that closes after 42 m depth with a nice 20m well, and about 50 m of development, here the meander continues but the situation becomes decidedly aquatic and having only 1 dry suit we decide that the daring rigging maneuvers were no longer worth it and that we had already soaked our boots sufficiently ... and not just those seen Luca's little dive in the 0 ° C water, due to the breaking through of one of the pools.

Back at the camp another fantastic sunset awaits us, but as soon as the sun goes away the temperature quickly plummeted below zero is an incentive to eat quickly and take refuge in the tent very soon. Good luck is on our side on Sunday and gives us another spectacular day: we wait for the sun to dismount the Campo and then go down to the valley. 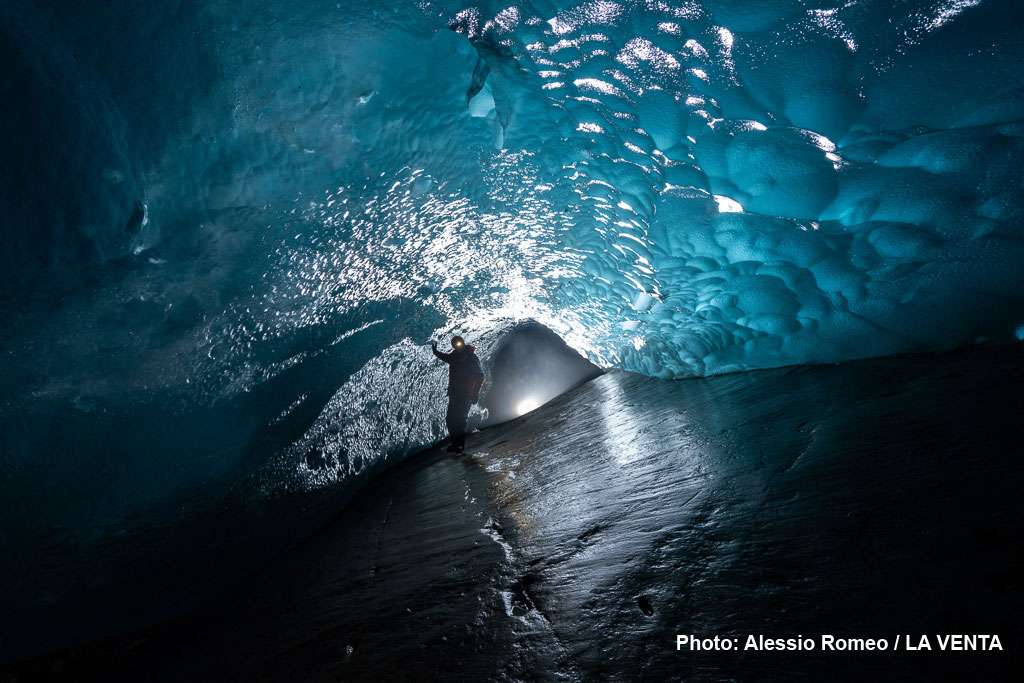 Given the late hour, we opted for a night in a hotel directly in Fiesch to plan the next day's ascent on the Aletsch glacier and the Marjalensee, one of the most beautiful contact caves (which are not only formed at the fronts!) of the Alps.

On Monday, facilitated by the very early opening of the cable car, we arrive at high altitude to enjoy the sunrise, thanks to much lighter backpacks than the Gorner, in a couple of hours of walking we are in front of the huge portal of the cavity. 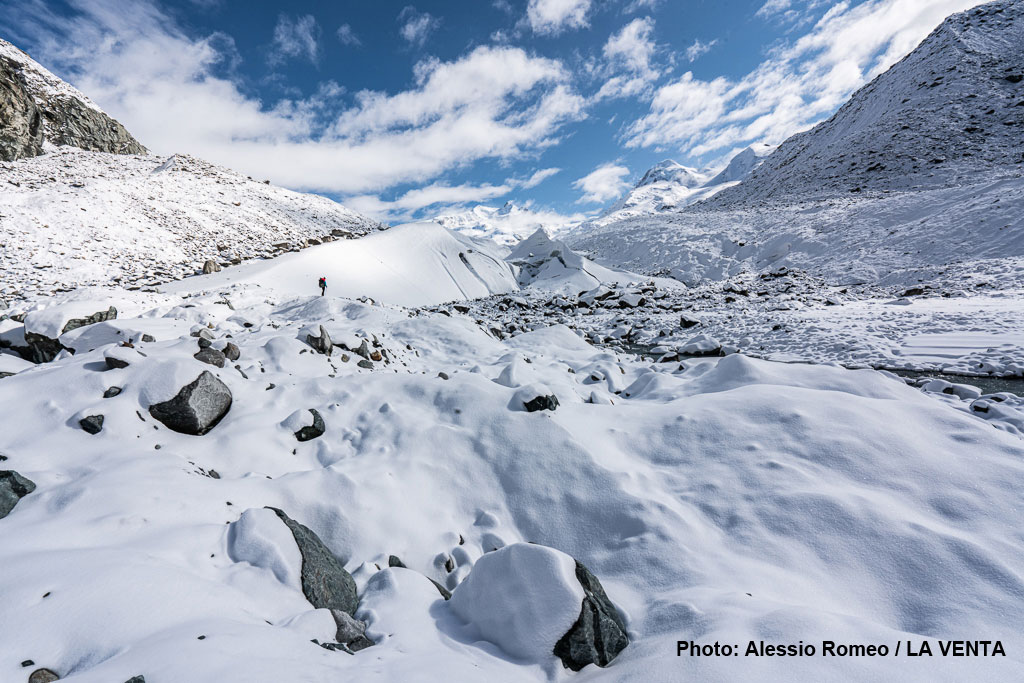 We arrive at the great portal around 10:30 am, and we notice that there is already a considerable flow of water towards the cave. Eyes focused on the vault and, crampons on our feet, we immediately slip into the cave, passing large blocks of ice that have detached from the ceiling and bypassing a majestic column of ice. Going down, we immediately notice a lateral tunnel to the left of the main duct, probably formed by thinning of the ice on the edge and the triggering of warm air currents. We walk it for several tens of meters but we stop on a 12m cockpit. We decide to go back to the main gallery to continue towards the bottom, the environment is always large and with many "scallops" on the ceiling always created by the circulation of air. We are inside a blue world in a thousand shades, an incredible environment between plays of light and reflections. The intense and transparent color of the ice is due to the lack of air bubbles which suggests that this ice is either very old or due to the freezing of water. 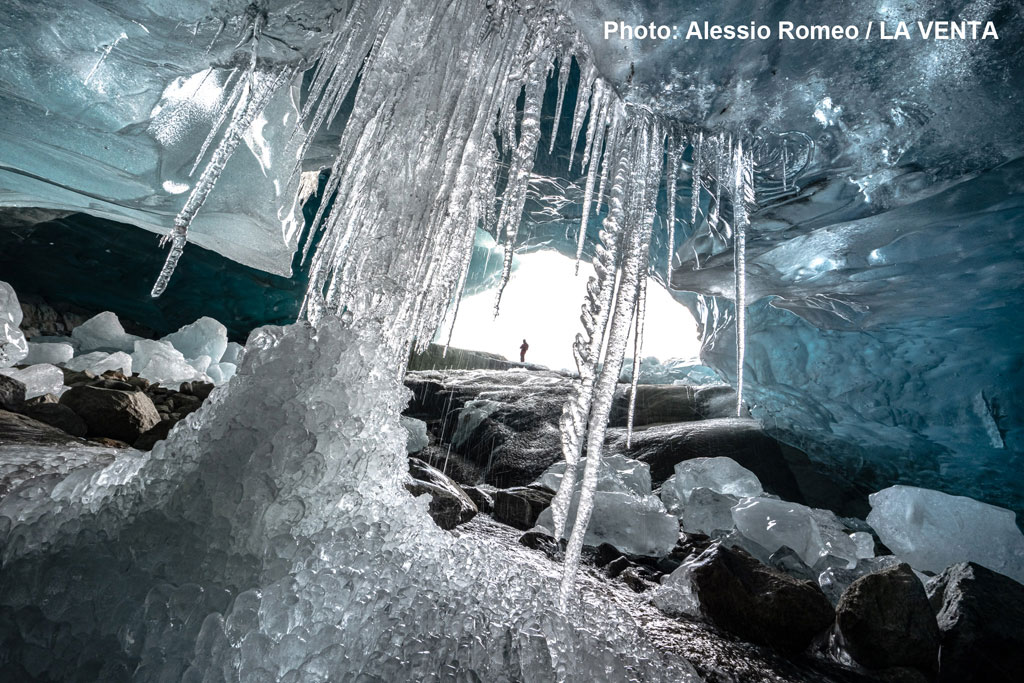 We continue to follow the stream that slides steeply towards the heart of the glacier, after a few tens of meters we have to fix a 15 m rope to overcome a jump. At its base, the cavity narrows and the stream disappears into a tunnel too small to be tackled without dry suits.

For today, this is the end of the game and only with the imagination can we imagine the journey that the water will make from this point to the forehead, located several kilometers downstream. Let's go back with a team that carries out the topographic survey and the other photographic documentation. At the exit we find Bernabè and his partner, French speleologists friends of Alessio, who had learned from him about this beautiful alpine cave. They are ready to enter the cave and we tell them about the side gallery which we have not finished exploring. 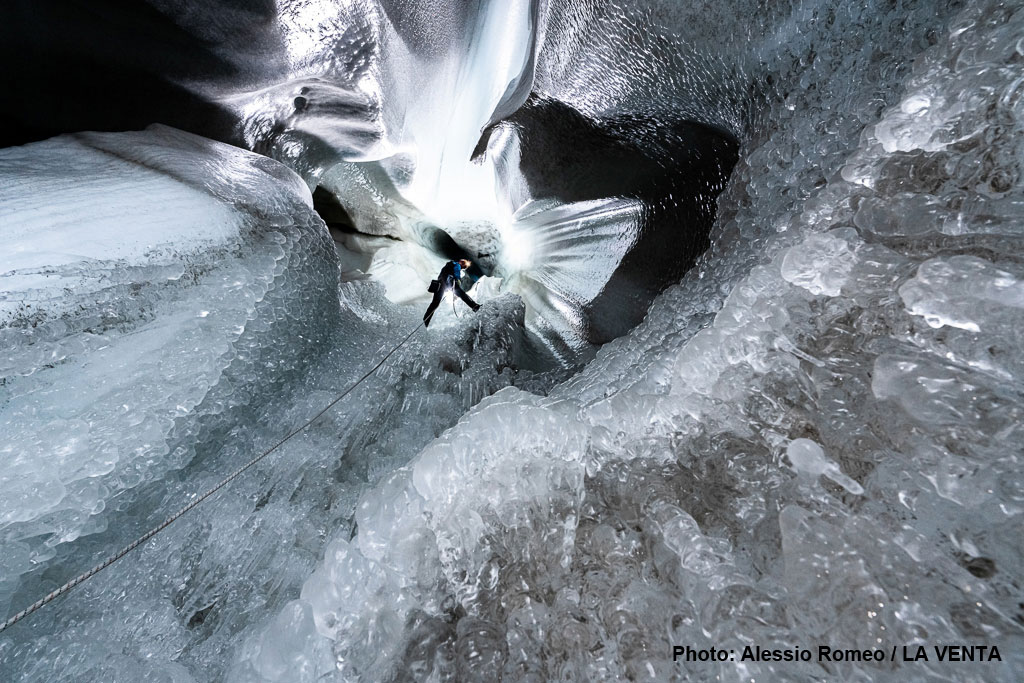 They will then tell us via e-mail that they have descended the p12 of the side branch and explored another 100 meters of the cave to then be able to reach the outside again further downstream. Probably, with the thinning of the ice next year this branch will disappear… it is the good and the bad of this floating world… as fascinating as it is ephemeral. 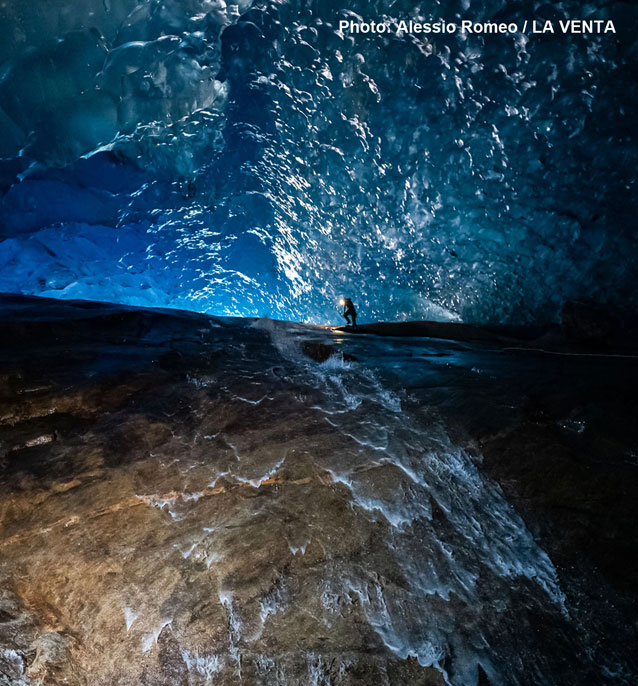