POLAR GLACIAL KARST: INSIDE THE COLDEST CAVES
The exploration project of caves within polar and sub-polar glaciers.

Antarctic glaciers and those surrounding the Arctic Ocean often have temperatures of less than zero degrees. In these environments there are no runoffs, except in rare cases.
Research carried out on glacial karst showed that its form changes when the ice temperature is lower than 3-5 °C below zero. This is due to its features. First of all, when there is a fall in the temperature the mechanical resistance of ice grows.
Secondly, if liquid water comes in contact with extremely cold ice it normally solidifies it and prevents its infiltration.
As a result, some layers of liquid water form and the ice below them remains cold and impermeable.  At the minimum rise in ice temperature, due to heat exchange or conduction, water can penetrate. This phenomenon rapidly increases the warming rate of the glacier and considerably worsens the ice mechanics, potentially threatening its stability.
In colder ice, like the Antarctic one, we discovered different phenomena, in which the speleological and genetic role is the result of sublimation processes in zones with temperatures lower than -20 °C that are currently the coldest caves explored so far.
This is probably the subject in glacial speleology that will ensure major scientific and explorative developments. Geographical area: glaciers with temperatures lower than -5 °C: Antarctic glacial tongues and of the coast of the Antarctic Ocean.
Future plans: future research opportunities for this project are very big because caves can directly affect the stability of large polar glacial zones. However these are remote areas with huge logistic problems.

Antarctica and Arctic - Antarctica 2000
The search for caves in the coldest glaciers, amongst bright spaces, glacial deserts and very low temperatures.

Thanks to the collaboration between La Venta, the Etsim of Madrid and the Institute of Geography of the Russian Science Academy, it was possible to perform the first speleological expedition in the Antarctic region. On 26th January 2001 we reached King George Island, in the southern Shetlands. At King George there is an airport, relatively close to the Antarctica. Here are to be found most of the states’ permanent Antarctic bases. This area is becoming the part of Antarctica devoted to wealthy tourists who want to come back home being able to say: “I have been there”. In fact, ships dock for a few hours with some well-offs anxious to buy gadgets and take some pictures of the numerous penguins.
We were hosted in the Russian base for one day and then we moved to the glacier on a small tracked vehicle normally used to transport troops. Bad weather conditions prevented us from seeing anything and so, one day after we landed, we were left at mid afternoon on the glacier, in the fog, on the snow, in a place that could have well been a ski slope of Sestriere on a bad weather day. Although, the GPS assured us that we were in the Antarctica. Who knows? 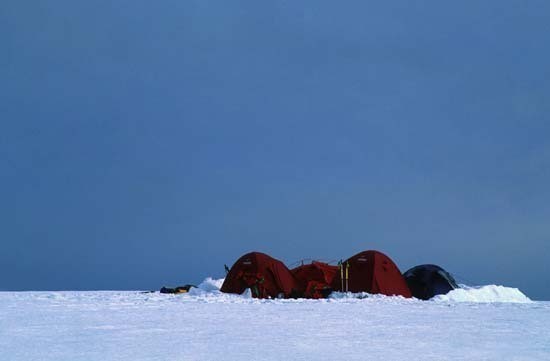 We prepared the base camp at 62°08.724 S, 58°50.600 W, 235 m AMSL, where Russian glaciologists found radar traces of liquid water at 50-80 metres beneath the surface. The area was entirely covered with snow, thus it is not the usual karst ablation zone but it is full of accumulations, absolutely devoid of runoffs.
In the evening the wind blew the fog away and we could finally see that we were on the island ridge, a wide crest. In front and behind us there was the sea, facing a large bay with an iceberg at the centre. All around us was just ice, an ice-cap glacier of over 1300 km2 covering almost the whole island. The view was really impressive.
The first days were dedicated to explorations towards the sea, in search of runoffs.
Moving was extremely difficult because of various precipices, constantly covered by a thin layer of snow, sometimes visible, sometimes absolutely not. A couple of misadventures (the glacier proved to be helpful in warning us) convinced us to carry on testing the snow before walking on it. We then discovered that it wasn’t enough so we decided to move as a rope party, with safety knots and all the rest.
The glacier, as a whole, breaks off while entering directly into the sea, with massive falls, (a phenomenon known as “calving”) and does not melt creating streams. Only near drains can soft slopes form with short and tiny streams. The ice temperature is just below zero degrees and the snow cover ends just around 100 m of altitude so for some days we thought we wouldn’t find any cave. Nonetheless, we were lucky: a side zone (62°09.7 S, 58°51.3 W) provided four caves, 15 to 55 m deep, above the sea level.
In harmony with the tradition of explorations in Patagonia, we gave caves the names of wines starting a debate between Piemonte and Veneto (Brunello AN1, Cabernet AN2, and Barbera AN3).

The frightening side of these caves is that they are quite wide with an access shaft of tens of metres, except for the first one, whose drop is hidden by a thin layer of snow. It can be noticed that the layer hides a lethal hole in the ice because a small stream of water can penetrate but not come out of it. These are terrifying traps.
The last day of camp was aimed at closing activities in that area but it was also the day when the Antarctic wind rose and swept the island with horrific strength: for over twenty-four hours it didn’t fall below 120-140 km/h. It wasn’t cold; on the contrary, the light was wonderful. We worked quietly but we were afraid of how we would find the base camp on our return.
In fact, when we got back, the sunset illuminated the base camp, flattened to the ground: two tents were dismantled and whirling and two more were totally unusable. The day after, we discovered that we had lost very little, but our immediate fear was of the rapid temperature fall that would occur after sunset and so we decided to dig a hole in which to find shelter, and survive. The sunlight turned into night, but the wind didn’t stop nor did we stop our intense work: after two hours we had made a hole of two cubic metres closed with the upper cover of a dismantled tent and some sticks. We were having dinner while, two spans above us, cubic kilometres of air coming from the centre of the Antarctica were moving towards north at a frightening speed.
Luckily, the temperature did not fall as drastically as we expected, and we spent a relatively quiet night. The following morning the wind reduced its strength and we performed the last scheduled operation, namely descending into the crevasses as close as possible to the base camp in order to check if we could find water. A useless effort as a true water-table seemed not to exist.
In the evening the tracked vehicle came to pick us up.
The following days we reached by sea another side flow area, trying to better define the idea of the karst topography of this strange place. We made friends with people living in the bases and we had a very nice experience.
After that, a Uruguayan plane took us north, towards Cape Horn and we admired, astonished, a Sierra Darwin cleared from clouds.