Summary and reflections on an improvised expedition 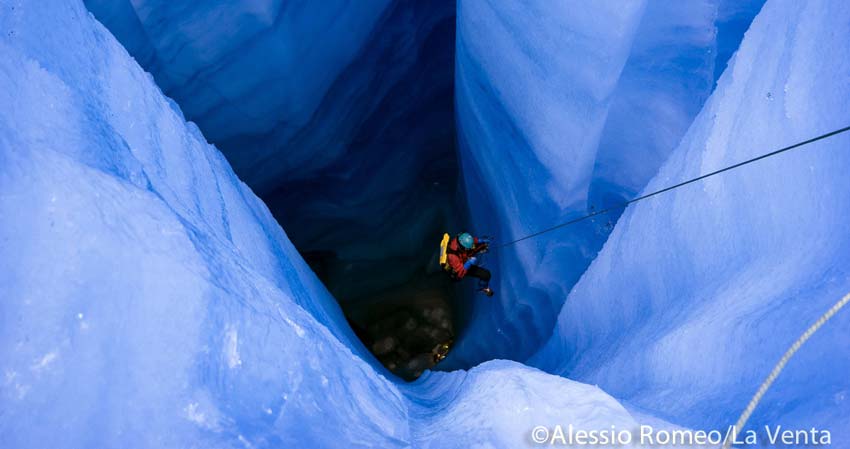 Often expeditions are modified during their execution and the events we're involved in carry us to new areas and different objectives, but this is all part of adventure and exploration!
In this case we had to completely change our destination and partially also the objectives even before starting. We had planned a scientific expedition in Argentina, on the famous Perito Moreno glacier and a lighter expedition, mainly explorative, on the unknown Ameghino glacier!

Two weeks before the leaving have been denied the authorizations for biological sampling scheduled on the Perito Moreno and everything was stopped! Scientists have frozen their tickets but the rest of the participants, mainly speleologists, preferred to go!
Towards what destination? And above all, because we would have had two different tranches of people (in the first and in the second half of April), how to manage logistically this alternation?
We discard Argentina a priori, we will be back next year with permits! We do it also with a bit of anger honestly! 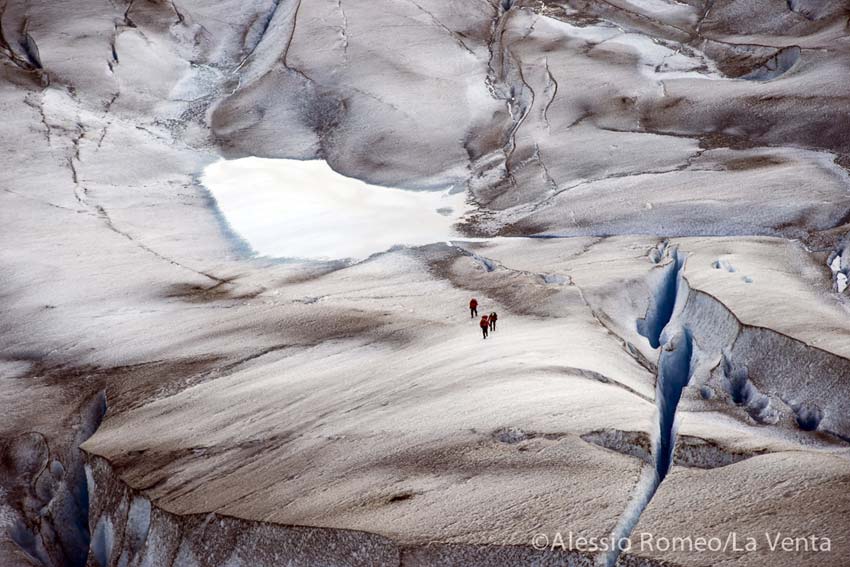 Thus remains the near Chile!
The choice of glaciers fast restrict at two ice giants, not strangers to our Association: the Tyndall explored in 2000 and the Grey explored in 2004, both located within the National Park Torres del Paine.
In both glaciers were found very interesting areas of glacial mills fed by mighty rivers, especially on the Tyndall. Our return, after so many years, was a good opportunity to add important data to compare with those of the past, another element to add to the study of hydrology and glacier dynamics that the Association has been working for over 25 years in Patagonia and more. 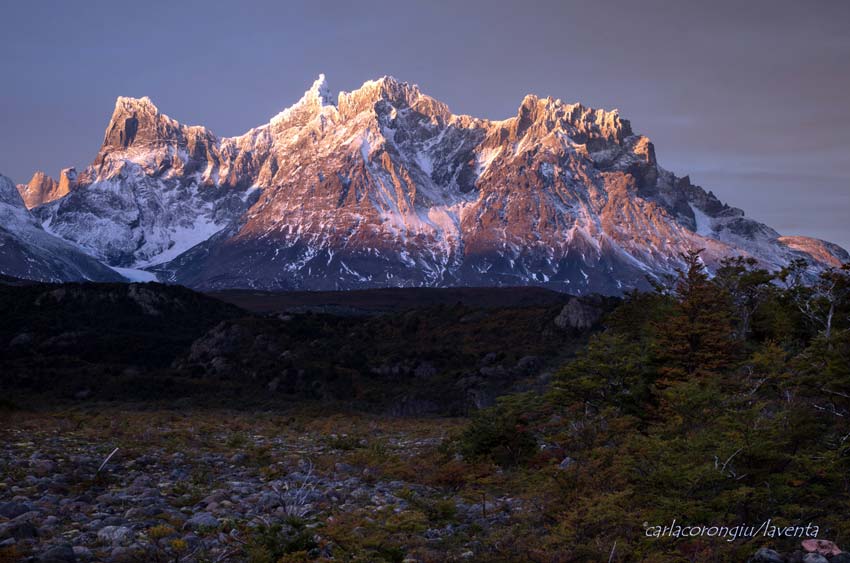 The time available for the two different groups was very limited and for this we prepared to make a careful prospection, focusing particularly on achieving a mapping of the major glacial rivers and their sinkholes and, with a bit of luck, manage to explore some making the topographic survey. 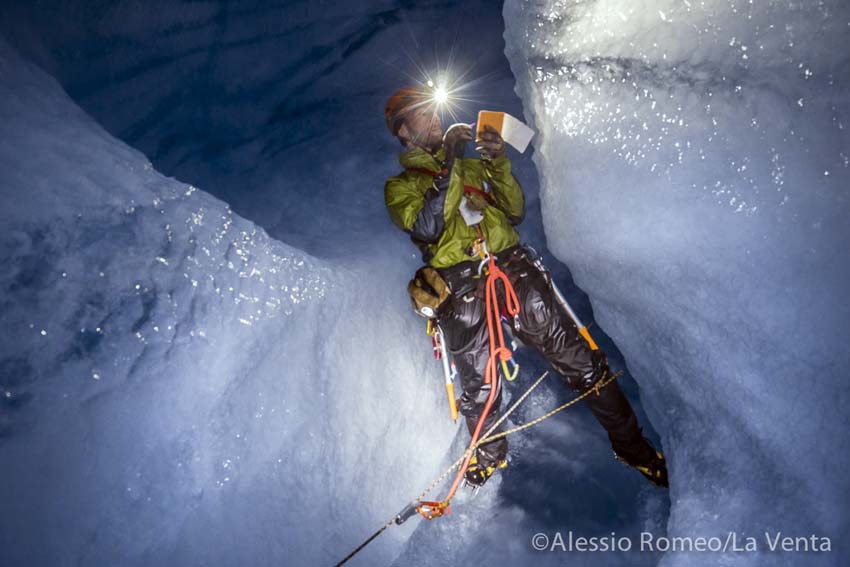 On the Grey the logistics was quite easy and fortunately this has allowed us to have 4 full days of activities on the ice. The first three days were dedicated to the identification of the major mills and to their exploration and mapping while we completed the mapping of the cryo-karst area only the 4th day taking advantage of an unexpected and unusual warm wind that caused a strong ablation and the consequent increase in the river flows and then has made it dangerous to descend in the mills.
A quick comparison between the GPS positions of the entire area of the mills recorded in 2004 and those of 2016 has shown us that this has not changed much even if it seems to have decreased in extension and above all to have an average altitude lower by about 70m.
I participated in the expedition on the Grey in 2004 and I did not need any confirmation of the GPS or other technologies to realize that a lot had changed since then: to get on the glacier I did not remember I had to descend a steep canyon (as we did this year) but rather I remember we easily would jump on the ice and probably from an area very far from the location of the camp of 2016. 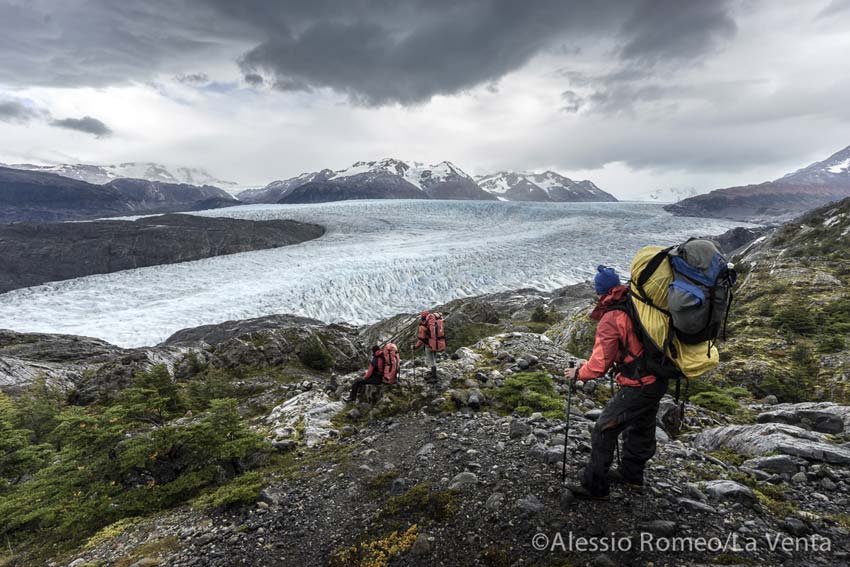 A very different expedition turned out to be the one on the Tyndall Glacier!
Permissions this time were obligatory, in some way we have obtained and even in a very short time!
To reach the glacier instead was not so easy and immediate. We knew that the use of transport horses was the solution to be fast and especially not to kill ourself of fatigue. Talking to the park authorities there was unfortunately a misunderstanding and the prohibition of using horses that we thought concerns the entire park was instead linked to a restricted area that at the end we had discarded as possible approach to Tyndall.
In conclusion we approached the glacier with our legs and it was a very hard job which has involved to do several intermediate camps and a continuous recovery of the 3 bags of food and materials that remained behind. Several of us at the end have done 4 times the approach to the glacier not to mention the rest.
On April 18, around noon we are leaving for the Tyndall but only the day 21 we will mount the camp on the edge of the glacier. in 5 we go to take a look at the area of the mills but we not reach because we can not guess the easiest way to go down which it is still at least 9 km in linear distance! 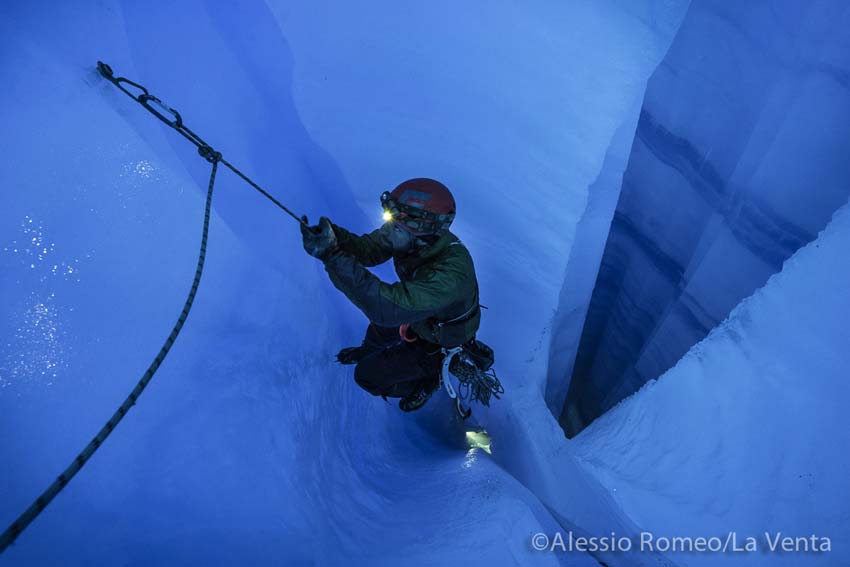 That day we realize that doing the exploration from morning to night is impracticable. There were not, fortunately, many crevasses areas but the distance was not to be underestimated not to mention the variability of weather that would make the return to the camp an odyssey!
So we decide to move on the glacier 6 of the 9 participants with two tents for a maximum of two nights! We reach the ideal area 2 km upstream of the mills. The next day some will be able to take "a dip" inside the Tyndall, others will position the cavities and the main rivers, others will take care of photo / video documentation useful not only to document but also for photogrammetry and 3D photo.
Meanwhile we had requested via radio two horses for the return thanks to a ranger who had accompanied us for the entire period and that was in direct contact with the Administration. Unfortunately this time no misunderstandings, the horses are no longer available because the tourist season is over and the two agencies that provide them have already taken them to another area. The Advanced Camp is reduced to the night of 22 and on 23 we return to Base Camp and from 24 to 25 we reach the Guardería where we expect the vehicle to return to Puerto Natales. Now we have an idea of the Tyndall karst area, the current positions of the active and fossils entrances and the glacier quotas but I maintain the suspense because the data are still to be processed. Surely after this prospection we think that this is one of the most interesting glaciers of Patagonia and given the good relations that we have re-established with the Park will not be long before we do a second tour better organized. Or at least I hope so! 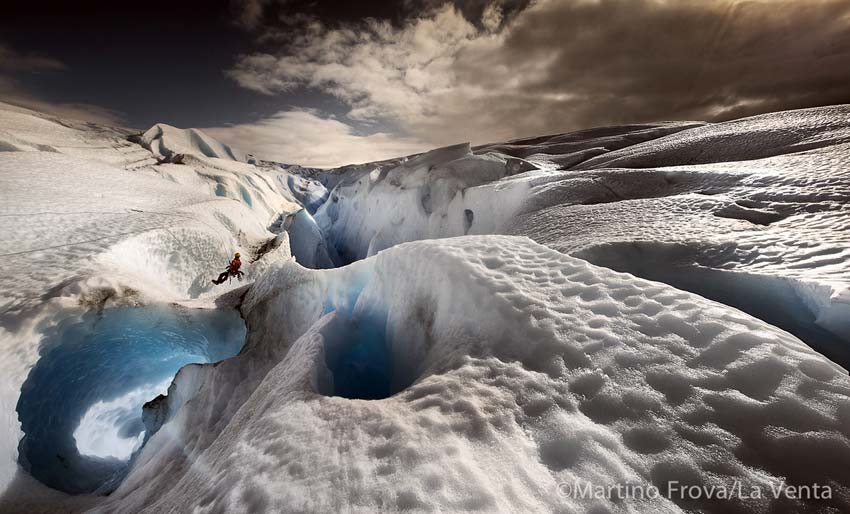 Thanks to all the participants of the first group who have embarked on this adventure without that the purpose was clear and mostly without the security that once arrived in Chile we had got the green light from the Park. A big thanks also to all the members of the second group which instead have stoically endured to a long and relentless march between land and ice with wind and rain, who suffering with fever who at the mercy of pain and suffering for accidents along the way and heavy loads we transported.
A special thanks for the collaboration to CONAF and in particular to the National Park Torres del Paine and in particular to the ranger Rafael Avila for the help and friendship. 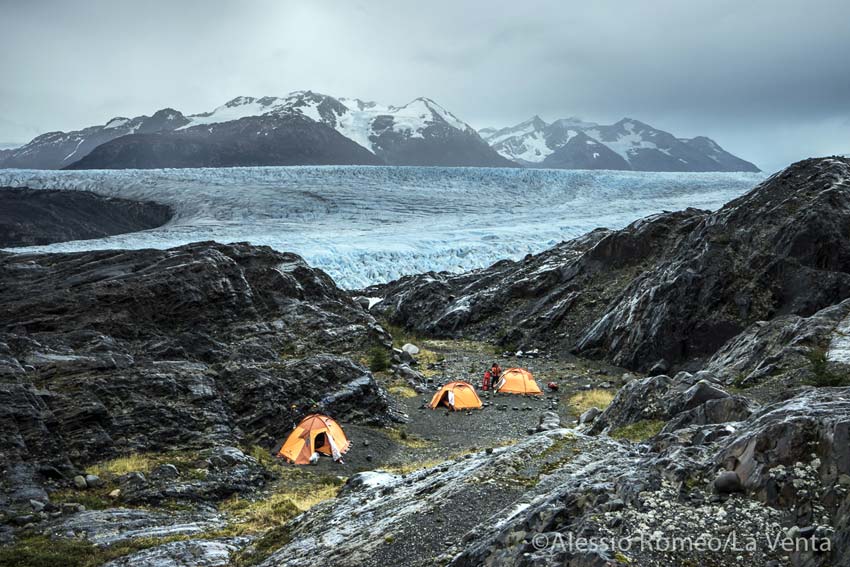