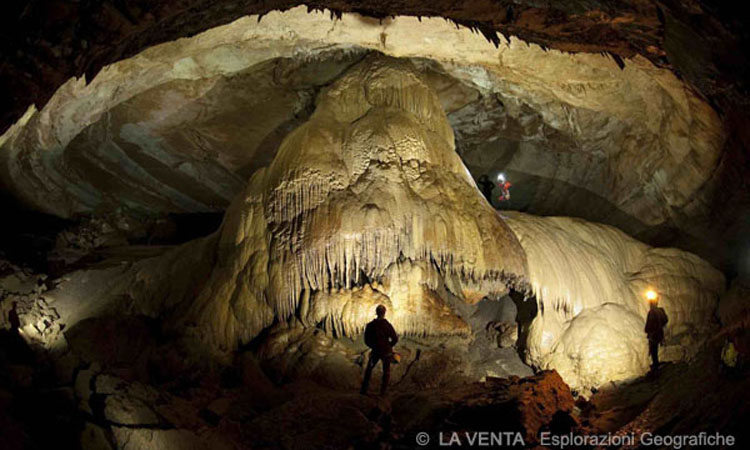 RIO LA VENTA: ON THE TRAIL OF A LOST CIVILIZATION
The research in an unexplored canyon that has transformed the cave hunters in explorers of the forgotten Zoque civilization. The Rio La Venta Project is a geographìcal research plan, covering the fields of archaeology, anthropology, speleology, geology, hydrology, and environmental conservation, concerned with the study of the large and almost unexplored area of the Selva El Ocote, in the western part of the state of Chiapas, Mexico. 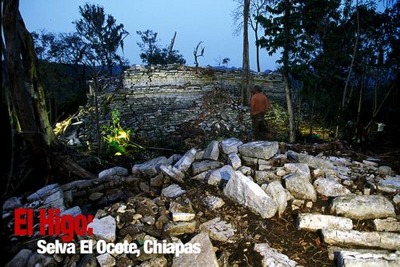 The Project began in 1990 with the first complete descent of the Rio La Venta canyon, when important speleological and archaeological evidences were first discovered. The winning of the Rolex Award for Enterprise (1993) led to the realization of some pre-expeditions and to the organization, in 1994, of the first of a long series of huge expeditions that formed the most complex and enduring research project of our Team, today still in progress.
The Project, mainly characterized by the integration between speleological and archaeological research, is aimed at the study of an extraordinary karstic tropical environment and its relation with the indigenous peoples that dwelled in it along the millennia. A so complex and ambitious aim was accomplished by means of close collaboration between La Venta Exploring Team and scientific institutions such as the Direction of El Ocote Reserve-Semarnat, the Enea, the Mexican Instituto Nacional de Antropología e Historia, the Bologna University and the Universidad de Ciencies y Artes de Chiapas.
Concerning the documentation, beside various journalists’ reports on press (Corriere della Sera, Il Gazzettino, Airone, Quark) and on TV (Superquark, La Macchina del Tempo, Ultimo Minuto), various documentaries have been made: in 1994 we shooted "Rio La Venta - A canyon between two oceans" – awarded with the "Genziana d'Argento" at the International Filmfestival of Trento the following year, while in 1997 was shooted the international documentary “The Rio La Venta Lost Civilization”, also winner of various international awards. In 1999 the multilingual (Italian, English, Spanish, French) volume “Rio La Venta, treasure of Chiapas” was published in collaboration with the Government of Chiapas. Specific results of speleological and archaeological researches have been published in national and international scientific journals. Geographical area: region of Rio La Venta, state of Chiapas, South-East Mexico, 100 km east of the capital city Tuxtla Gutierrez.
Future plans: the situation of the orographic left side of the canyon is rather clear but there is still a huge potential for new discoveries, especially in the northern part. Of the orographic right side (El Ocote) we know only the south-west and the northern part, while the central section is still unexplored and difficult to access. The archaeological side of the research, which requires huge development, is now beyond our means. Rio La Venta Archeological Project

As a consequence of the various archaeological discoveries made during the first expeditions, La Venta Exploring Team is organizing, together with the Università di Bologna and the Universidad de Ciencias y Artes de Chiapas, and thanks to financial support provided by the Direzione Generale per la Promozione e la Cooperazione Culturale (Ufficio V) of the Ministero degli Affari Esteri, the Rio La Venta Archaeological Project, a research program aimed to a global evaluation of the archaeological remains of the Rio La Venta area.
Archaeological researches began in 1997, under the direction of Giuseppe Orefici, when surveys and excavation were carried on in some of the region’s caves. Since 1999, directed by Davide Domenici and Thomas A. Lee Whiting, the Project was mainly devoted to surveys that led to the discovery of more than 120 archaeological sites. These sites can be divided in two categories: caves used for ritual purposes and surface sites ranging from rural hamlets to huge monumental settlements. 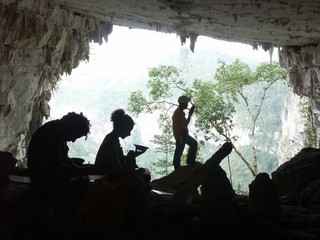 The analysis of the sites, as well as excavations in some of them, led to the reconstruction of the prehispanic history of the region, visited since 300 B.C. by Zoque Indians for using caves as ritual precincts devoted to water deities, an activity carried on uninterruptedly until the Spanish Conquest; among the excavated caves, worth mentioning is Cueva del Lazo where ten sacrificed children were buried in 10th-11th century together with a vast array of perishable materials, among them the most important textile corpus so far known in Mesoamerica. Surface sites, on the other hand, testify two different colonization waves, respectively dated to 7th-11th and 13th-15th century. Both colonization phases were attested in El Higo, the monumental site where extensive excavations were carried on in 2003 and 2004.
Historical and anthropological research allowed us to study the persistence of the ritual use of the region’s caves in Colonial, Modern and Contemporary times, so testifying the importance that Selva El Ocote, called Norte Ipstek by local Zoque Indians, had as the main sacred space of the Zoque world for more than two millennia. 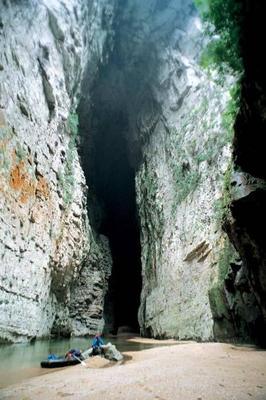 After the first integral descent of the Rio La Venta canyon, the geographical-speleological branch of the project has been mainly aimed at exploring and recording the huge Selva El Ocote’s underground hydrological web. Along the years, tens of caves were explored and surveyed to a total development of more than 60 kms, showing as the size of the karstic phenomenon, the underground hydrology and the surface morphological features typical of a tropical karst environment make the area of Rio La Venta a reality of world scale importance.
One cave in particular, the Cueva del Rio La Venta, represents an extraordinary "passing through" underground system connecting, with almost 15 kms. of galleries of rare beauty, the plateaus on the left orographic side with a karst spring rising on the canyon bed. Besides, some of the sotanos located far and deep in the Selva El Ocote were also reached: these black holes represent some of the toughest places to reach on earth, due to the extremely jagged, uneven surface morphology, allowing to cover no more than 500 mts. per day. The most fascinating among them, the "World Navel", was reached during the 1997 expedition thanks to complex and very technical rope descents and ascents of almost 100 mts. from the helicopter, and again on foot in 1998 after an exhausting 15 day approaching march.